As I’ve said many times, Cheryl spent 167 days in 3 different facilities. One of the weird side effects of spending that much time in the hospital, is that you sort of develope a Stockholm syndrome. People CARE in those places. Probably why they call them CARE facilities.

Everyone was always so nice. They respected Cheryl’s inabilities and constantly cheered her (and I) on. So when we left those facilities, I naively thought the world would be different for us. We were now a “family with disabilities.” I had myself a handicapped person. Humankind was going to be a lot nicer to us now, right?

WRONG! People don’t give a FUCK.

Very early on in her recovery, Cheryl couldn’t walk long distances so I often found myself pushing her around downtown Long Beach in her wheelchair. People would have to at least respect the wheelchair, right? Wrong again. People weren’t even kind enough to step out of the way. You know how many times I had to say “excuse me please?” Too many times.

There would be no doors held open for me.

At the Aquarium of the Pacific.

What’s really funny, now living in a disability world, is how quickly I saw just how shitty the general public treats the handicapped. Sure, they give us a couple of spots by the door, but non-handicapped people park in ’em all the time.

Ramps? If a we’re lucky to find them, there’s usually some douchebag walking down the ramp to avoid taking the two steps that reside next to it. Ever try to push a wheelchair up a ramp, that is only wide enough for the chair, while a douchebag walks down it? Then have them give you a look like YOU’RE inconveniencing THEM? Oh, what fun.

It’s not just the chair though. Those days are long behind us, but that doesn’t mean Cheryl is skipping along humming a tune. She still has a lot of mobility issues and moves very slow. I hate to say it, but to anyone with a smidgen of logical skills can see that she clearly has a disability. She LOOKS handicapped. It should be obvious that there’s SOMEthing wrong with her. It’s not though.

Bring on the aniexty!

A week or so ago, my mom was in town which meant there was a lot of activities out in the public world. To make matters worse, it was the weekend so everyplace we went it was crowded. This isn’t the greatest of scenarios for someone who is half blind, deaf and moves slow.

But it’s not just Cheryl. This provides a high level of anxiety for me as well. I am a walking 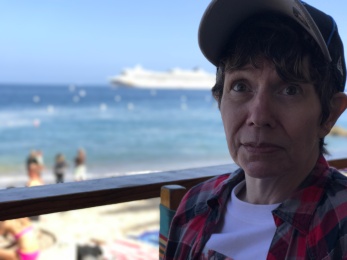 force field, shielding her from the general public that has no concern for someone in her condition. I’m constantly aware of where she is and those around her, because people WILL bump into her and unlike us, a little bump can do some damage… especially on her left side where she’s the weakest.

You have no idea how often this happens. Maybe we’ll get an “I’m sorry” or an “excuse me,” but it’s not like she can hear them. In fact, it makes HER feel bad because she was in the way.

Which, in turn, makes ME feel bad. I don’t want her to feel like she can’t go out and do things just because 99% of people are assholes on a daily basis.

Obviously, I get very protective of her when we’re out and, to make this all about me, sucks ass. It’s hard to enjoy the activity when your Spidey-sense is constantly going off. Danger around every corner.

We get to the aquarium and it’s PACKED. It seemed as if every family had a gaggle of small children AND a stroller. Now, I would have been annoyed by that type of crowd regardless, but I was extra annoyed having to constantly protect her from wild children lacking supervision and those that clearly should never be allowed to push their spawn around of four wheels.

Cheryl was constantly in danger of being run into and run over. More than a few dirty looks were thrown at members of the general public. Good ‘ole passive aggression! That’s what I say.

There’s also the danger of Cheryl getting swept up in the crowd. The whole half blind/deaf thing means she will sometimes think someone else, who has a similar build to me, IS me and will wander off. The lack of hearing means you can’t call after her either.

This means that I have to have one eye on her ALL the time. Didn’t leave a whole lot of room to enjoy the fish behind the glass, but oh well. Luckily I have a limited attention span for that shit. I don’t need to stand there and watch ’em, a glance is enough most of the time.

To be fair all I really wanted to see were the jellyfish and the sea horses and we did both. So I was good.

It never ceases to amaze me the general lack of decency we have for one another when a bunch of strangers decide to inhabit the same space. Especially when it comes to the disabled.

Like I said though, people don’t give a fuck. Literally 0 fucks.

One caregiver's story told through honesty and, hopefully, humor!